Trey Hardee is an American track and field athlete who specializes in the decathlon. He is a former NCAA Champion, a two-time World Outdoor Champion, and a Silver Medalist in 2012.

Chelsea Hardee, formerly Chelsea Johnson, is a former American pole vaulter. She qualified for her first World Outdoor Championship team with her runner-up performance at the 2009 USA Outdoor Championships. Chelsea also capped off an impressive Pac-10 career in record-breaking fashion in setting a new collegiate record in the women’s pole vault (4.60 meters/15 feet, 1 inch) to win the 2006 Pac-10 Track & Field Championships and was named the 2006 Pac-10 Women’s Field Athlete of the Year. Chelsea continued a successful season outdoors after her fourth-place finish at the 2004 Trials, just missing a spot on the roster in Athens.

Minka & Luca are their two Rottweiler-mixed pups and are as sweet as they are playful. Between daily jogs, backyard romps, and keeping up with Trey & Chelsea – Minka & Luca are the perfect companions for two world-class athletes. If they aren’t full of ‘kisses’ or ready to swim, you can probably find these two pups helping Trey recover with an occasional nap on the couch. 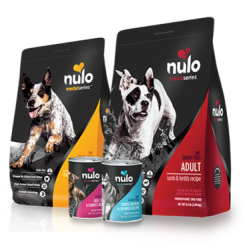 The Hardees mix kibble and wet foods for Minka and Luca, with MedalSeries Chicken, Lamb, Beef, Salmon, and Turkey recipes.