When you’re balancing success on the edge of a blade, focus and concentration are your top priorities … unless you’re Charlie White, Gold Medalist ice dancer. The first thing you notice when you meet Charlie – DJ and Finn are definitely his top priority.

DJ and Finn are two adorable Cavachons that belong to Charlie and wife, Tanith Belbin. While Charlie and Tanith are both truly stars on ice, nothing lights up their home like the pitter-patter of paws that come with DJ and Finn.

Whether it’s playtime outside with the pups, a light stroll through their beautiful Ann Arbor, MI neighborhood, or some well-deserved recovery on the couch … DJ and Finn magically appear by Charlie’s side. Even on the ice, Charlie’s pups aren’t far behind.

Charlie is a Gold Medalist and Two-Time World Champion with ice-dance partner, Meryl Davis. Tanith is a Silver Medalist ice dancer herself, a Four-Time World Medalist, and now an NBC commentator. While Charlie and Tanith have dedicated their lives to their performance on the ice – both have personal passions when it comes to their pets.

DJ and Finn are their fur babies and just like the fuel that propels the couple as athletes, they care about the nutrition that goes into DJ and Finn’s bowls. Quality protein, low carbs, and responsibly sourced ingredients aren’t just for athletes. Every dog or cat deserves the kind of nutrition that leads to a great life.

While the couple travels the world and have become tremendous ambassadors for their sport, follow them on social media and you’ll soon discover that they might be even better ambassadors spreading the message about Nulo and our mission to be Healthier Together™. 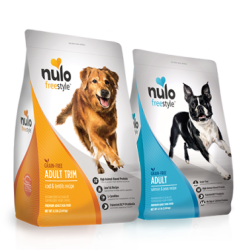