Kelly Williamson has been a professional triathlete for 12 years, but her roots began with swimming, as she competed in college at the University of Illinois where she studied Kinesiology.

She moved from Illinois to Colorado Springs, as she was invited to be on the US Resident National Triathlon team, where she lived at the US Training Center for four years.

Her major career accolades include Female Elite Rookie of the Year (2002), and more recently she was the 2012 runner up at the 70.3 World Championships.

She is a 5x 70.3 Champion with over 25 career wins. Kelly has also raced the Ironman World Championships in Kona three times.

While Kelly came from a swimming background, she has also excelled highly at running, posting a best 1:14 half marathon and has won Austin 3M Half Marathon three years in a row (2012-2014).

She currently resides in Austin, Texas with her husband (and coach) Derick, and their dog Amico (Australian Cattle Dog) and cat Corgi. When not swimming, cycling or running, they enjoy trying various local craft brews and pedaling Amico to the local fields to play ball; or even better, when in Colorado for their summer trips, letting him swim in the rapids of the Arkansas River.

Amico is Kelly and Derick’s Australian Cattle Dog, named after one of their favorite pizza joints in Salida, Colorado. Always alert and ready for a good chase, Amico loves to chase balls, climb trees and run the occasional 5k through their South Austin neighborhood. In fact, Amico is the reigning divisional champion of Austin’s own Donkey Doggy Dash 5k. His friendly curiosity and keen awareness of food makes him quite fond of any Nulo bag sitting around the house. 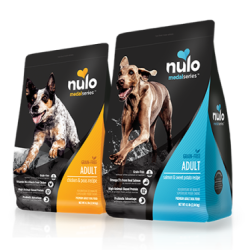 Amico gets a mix of MedalSeries Adult Chicken and Salmon recipes.