I have a pretty “ruff” life. My name is McCormack, but I also go by Macca, Macca Dog, or Mac. I live with my peeps, my BFF Chris and my “Angel” Jennifer, along with two other little furry animals who are cats (but they truly are my friends).

What I have come to realize over the last nine years of my life is that I seriously picked the BEST house to run under when I was lost and scared. Let me explain my story.

I remember it like it was yesterday. I ran away from another family. I am not sure why. I had a thin black collar on but no tags yet. I found a house that I was able to crawl under because it was getting cold. I don’t know how long I was under the house for. Every time it got light out, I heard this very LOUD noise, and then I heard footsteps on the floor. I was trying to get their attention. I would bark, whine, and whack my tail against some wood, but nothing was happening. I thought I needed to leave, but then I realized I couldn’t find my way out. It was scary underneath the house. Then, when I starting to get desperate, I saw my “Angel” and she saw me. She had some VERY yummy food on a plate and I wanted it SO BAD. I was STARVING. “Angel” pulled me out from under the house. And there I was, eating this wonderful “steak.” It was the “BEST DAY EVER.”

One observation with my peeps is that as I was a puppy, they taught me many things AND then gave me treats. When I had to go outside to go potty, I had to ring a bell. Since my puppy years, I have been able to sit, shake, bark, talk, hula, and I can EVEN do a burpee. At least that is what they ask me to do; I have NO IDEA what a burpee is? I just lie down and then jump high. I get SO MUCH praise for doing that.

Another observation with my peeps is that they are always on the go. I see them leave with a bag full of FUN TOYS to go to the “pool,” and then they come back smelling a bit funny, like chemicals. BUT back in my puppy days, I grabbed the big bag of toys and made it mine. Inside, I found this blue and white foamy thing and I had ALL DAY to pull it apart. My “Angel” came in the door and just stared at the floor as she said to me, “It looks like it snowed blue and white.” She told me it was a swimming pull buoy. Whatever that is?

Something else I noticed with my peeps is that they jump on a device that has two round things and pedal very fast, but they don’t go anywhere. It can be VERY loud but I don’t mind. I like hanging with them when they are on this device. I chill on the bed and my BFF will give me treats if I have been there for a while. I do LOVE these people.

I did pick a perfect house to run under because my peeps LOVE to go run and they take me with them. We go to the park. We drive over to the trails. Even “my angel” would run me OVER to the trails and I thought again, “BEST DAY EVER.” When it would get dark outside early in the evening during winter, my BFF would drive us over to the Riverwalk. There were a lot of lights on the trees, which I thought was odd because squirrels live in trees. Very confusing. Wait…squirrel?

After I turned 9 years old, I would go for trail runs with my BFF, but then for the next two days, I was very sore and achy. As a “middle aged” dog, my joints were starting to hurt and my recovery time wasn’t there. Something else I noticed is when I don’t run, I feel worse and my joints and muscles just ache. After my BFF and I would go for a run, I did NOT want to eat. I would turn my nose up and JUST hoped that they would give me a cookie or a chicken strip. I didn’t want my food anymore. My joints ached and I didn’t have the energy for my run because I wasn’t eating enough. It made me very sad, as I do love those trail runs with my BFF.

Then my “angel” was gone for almost a week. My BFF told me she went to an Ironman triathlon in Florida. Whatever that is? When she came back, it may have been the “BEST DAY EVER,” because she looked so happy (She said, “Fourth in her age group” and she brought ME back a treat. This was so cool because she was thinking about ME. She was telling my BFF that she talked with some people at the Ironman Florida expo that sold dog and cat food. It was called Nulo Pet Food, and she said that since I was getting “older,” Nulo suggested that I needed a different type of food. Whatever that means? Older? HA! The Nulo people gave her samples for my little furry friends and ME to try out.

After two months of consistently eating Medal Series “Senior” Dog food by Nulo and the Nulo canned food (lamb, turkey, chicken, and beef), I started feeling like my “puppy self” again. Ever since I started eating my new food, I have licked the bowl clean. I enjoy heading for my runs again since my joints don’t ache like they used to. I noticed that I move better overall. Here is something else that I noticed: When my peeps forgot to pick up the Nulo soft food to mix with the Nulo kibble, they used the “old” soft food that I used to eat. This made my tummy hurt very badly and I didn’t want to eat; and I ate grass instead to help my tummy. So, thank you, Nulo, for giving some samples to my “Angel” at Ironman Florida, as I do feel like my “puppy self” again. 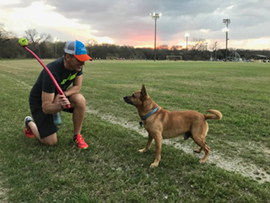