While this statement was made some 200 years ago, if you do a quick search on ‘healthiest forms of exercise’ you will still find walking comes up at the top of the list. It may sound ironic coming from someone whose job it is to run, swim and bike close to 20 hours most weeks, but I’ve always said that I believe walking to be the best pure form of exercise. It’s simple, cheap, and convenient. It’s not hard on the body, but the weight-bearing aspect allows for bone-building and strengthening. And most of all; it’s natural. Of course it could be described as ‘boring’, which is why it’s made all the better by having a furry friend tag along. 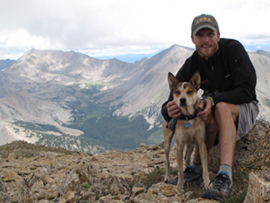 We have had our cattle dog, Amico, since 2010. When we first got him, we took him out to his first (and only) Doggie Dash 5k. He ran with my husband Derick, a lifelong, natural and very strong runner; and together the two of them soared along to an overall win in a rather speedy 16:20. This was just the beginning of our adventures with Amico, as he has since climbed mountains (dry and snow covered), swum in cold streams and gone for countless trail runs with us. The past few years, we had to come to the realization that, like all of us humans, Amico is aging. While he still has that eager smile anytime we get ready for an adventure, we have had to slow him down a bit in terms of the amount and duration of his excursions.

We had long talked about adding to the pack and giving Amico a buddy, we finally did so this past April. We found Birdy, a blue heeler mix, through a rescue. Due to heartworm, she was scheduled to be put down in Texas as the rescue that found her on the streets couldn’t afford to treat her. New Hope Cattle Dogs (the Colorado heeler rescue) took her in, hauled her all the way from Dallas, and put her up for adoption. She looked so sad and something about her immediately spoke to us. We knew she needed a lot of love and attention, so we took her under our wing, and the past 6 months we’ve been nurturing her back to health. If you’re not aware (and I was not), while a heartworm positive dog can recover, their activity has to be strictly limited until all the heartworms are gone and treatment entails a series of injections aimed to break up and kill the worms. Throughout this process, intense exercise could result a blockage in their lungs. Unfortunately, at her 6-month checkup, she still tested positive; so, onward we go, continuing to monitor her and limit her exercise.

With an aging Amico needing to dial down his activity levels a bit – and a ‘healing’ Birdy requiring her to be on a leash most of the time – what better way to get these two out than take them on walks? And that’s precisely what we’ve been doing. Additionally, we found out at Birdy’s 6-month checkup that she had gained a little weight (likely in part due to forced inactivity), so I figure more frequent short walks would be good for her stocky little self. 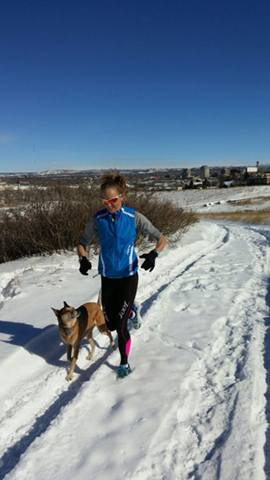 Birdy definitely has a history of abuse, as she is very nervous around people and any loud noises. The walks have slowly gotten her acclimated to scary things in the world like Runners, People on Bikes and all the other daunting noises that we find when touring our neighborhood. Little by little, she seems less tense when we encounter these strange creatures and sounds! Additionally, given that Birdy is young (2ish) and Amico a bit slower (9ish; you never know for sure with rescues), he seems to feed off of her energy. When we walk, he will watch her closely; she’ll tug at me, wanting to pick up the pace which keeps Amico on his paws. And for myself who tends to beat my legs up with long, often hard bike rides and runs, the walking serves as great active recovery. I guess you could say it’s a win-win-win for the entire family!

And honestly? I think I look forward to the morning and evening walks and gain as much enjoyment from them as they do. It’s a time to slow down, enjoy the outdoors, and watch our pups explore their surroundings; taking in smells, sights and talking to their furry friends. I guess Mr. Jefferson was onto something; habituate yourself to walk often, and ideally with others; socialization, movement and fresh air is good for us all; two-legged or four.