Your cart
Magill with
John Isner
watch the video

At a towering height of 6’10” and wingspan that seems to stretch the entire width of a tennis court, it’s hard to miss John Isner. But it’s his English Cocker Spaniel, Magill, that steals the spotlight on the court and he isn’t afraid to face his dad’s 150mph serve!

With access to an unlimited supply of tennis balls, Magill (named after the Georgia Bulldog Coaching Legend, Dan Magill) is living the dream and thinks he has the best dad that a dog could hope for.

Highly touted as having the most powerful serve on the ATP World Tour, John turned pro in 2007 and achieved his career-high singles ranking of world No. 9 in 2012. At the 2010 Wimbledon Championships, he played the longest professional tennis match in history, defeating Nicolas Mahut after 11 hours and 5 minutes over the course of three days! Yes… an 11-hour tennis match! Then, in 2018 John had to test his endurance once again when he battled South African Kevin Anderson for 6 hours and 35 minutes in the longest semi-finals match in Wimbledon history.

John credits his elite nutrition for allowing him to focus on a ball for hours on end and knows that Magill needs the same level of superior nutrition to stay energized throughout each day and fetching balls for years to come. 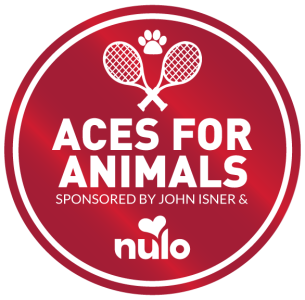 John and Magill embody Nulo’s mission – the passion to inspire others to live active, healthy lives – and provide pets the same opportunity. According to John, "THE TENNIS COMMUNITY CARES ABOUT FITNESS AND NUTRITION AND THIS IS OUR CHANCE TO INSPIRE OTHERS TO CARE ABOUT THEIR PET’S NUTRITION WHILE WE HELP DOGS AND CATS FIND THEIR FOREVER HOME.” That’s why John has teamed up with Nulo for an exclusive Aces for Animals Foundation. Nulo donates 10 meals of pet food to a local animal shelter for every ace that John serves at select ATP World Tour events. We're looking forward to a new season and an even bigger contribution next year. He is currently at over 10,400 aces - making him 3rd in aces history... So keep on serving up those aces John, as we are looking forward to donating even more meals to shelter pets in need next year.

Check back to see how he's progressing as he swings through his ATP tournaments! You can also follow us for the latest on #AcesForAnimals on Instagram and Facebook.